Ad blocker detected:Our website is made possible by displaying online advertisements to our visitors. Please consider supporting us by disabling your ad blocker on our website.

Discussion dedicated to promoting the well-being of your dog through diet, exercise and general health tips.

Having said all that, I've been rubbing toothpaste on his pads as that's meant to show up corns but can't see anything...
Jasper, lurcher, born December 2009
Top

If the problem was a corn, would you expect to see him lifting his paw? He's not doing that so maybe it's not a corn or something foot related after all.
Jasper, lurcher, born December 2009
Top

If it IS a corn, a greyhound trainer or a vet who specialises in greyhounds is a much better bet than a standard small animal vet. Our local retired greyhound centre is managed by a retired trainer

and she is so quick to get rid of corns you barely see what she is doing, while some vets make a real meal of it. But a standard Dog Rescue will not have such a skilled person as the staff are mostly violently anti greyhound racing, and don't realise just how good some trainers are.

But, you know, it may be a bruise. Or he may have scorched his pad on a hot pavement. I know you are careful but it can still happen. Or he may have a grass seed between his toes. So many things can cause a sore paw.
A dog is never bad or naughty - it is simply being a dog

I think I'll just monitor it for now, and keep peering at his paws to see if anything shows up. I think if it was something like a grass seed he'd be licking his paw and lifting it.

I would get the vet or a physio to give all his muscles a good feel, but if he doesn't actually react, he's so anxious every muscle will lock solid anyway. At least with this warm weather he's not inclined to do too much leaping arounnd and is happy with short sniff walks.

I hope it's not a corn - I've read up on how the dog doesn't need to be sedated as the vet probes deep into the pad but can't see J complying!
Jasper, lurcher, born December 2009
Top

The person I mentioned does no deep probing - just "oh yes" and a quick flick with a blade. Corn gone.

But it's quite unusual for non-greyhounds to get corns, so probably it's a "keep a cautious eye on it" scenario.
A dog is never bad or naughty - it is simply being a dog

He is 5/8 greyhound. So maybe he'll just get them on a couple of his feet

Finally, I took Jasper to the vet to have his foot looked at. I'd left it so long first to see if it either got better or worse on its own, and then because with the hot weather, he's been walking less in general which I thought might cure it if it was a joint problem rather than a corn. Plus we didn't really do any pavement walking when it was hot. But he's still limping.

Jasper was NOT going to let the vet examine him

He was happy for me to lift his feet for the vet to look at though, and the vet thinks that while there could be a corn, his pads have just worn thin enough to cause him discomfort. I'll try to get a photo later... Ideally I'd just walk him on soft ground or perfectly smooth surfaces for a bit, but nowhere's soft underfoot now! So Plan A is for me to soak his feet in saline solution once a day to toughen them up a bit. If that doesn't help, Plan B is to sedate him for a full examination but we want to avoid that if at all possible.

I'm just having a look around the internet for an idea of what strength saline I should use, and how long to bathe his feet for. I've also seen surgical spirits, witch hazel and Musher's wax suggested - not sure about the latter as that would presumably soften the pads rather than harden them.
Jasper, lurcher, born December 2009
Top

No comment on the saline, but you could rub in aloe vera gel a couple of times a day.
A dog is never bad or naughty - it is simply being a dog

The saga continues... the pavement-walk home from the vet made the area I was worried about much more distinct. I managed to get a clear photo of it, posted it on the Lurcher Link forum and the person who runs it said, 'Yup, that's a corn.' So I've now sent the photo to my vet asking him if based on them he thinks it's a corn after all, along with a run-down of the various treatments I've been reading up on. Here's the pic - the second one showing more detail of the suspected corn. 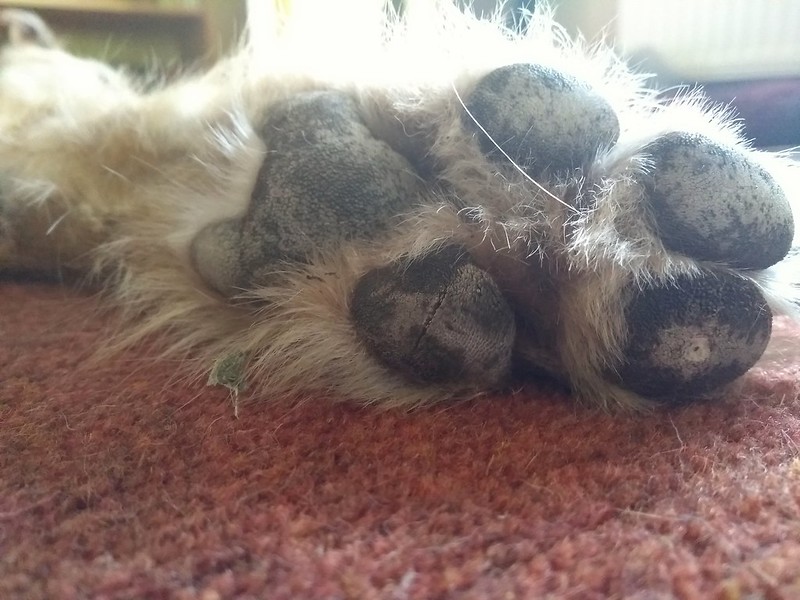 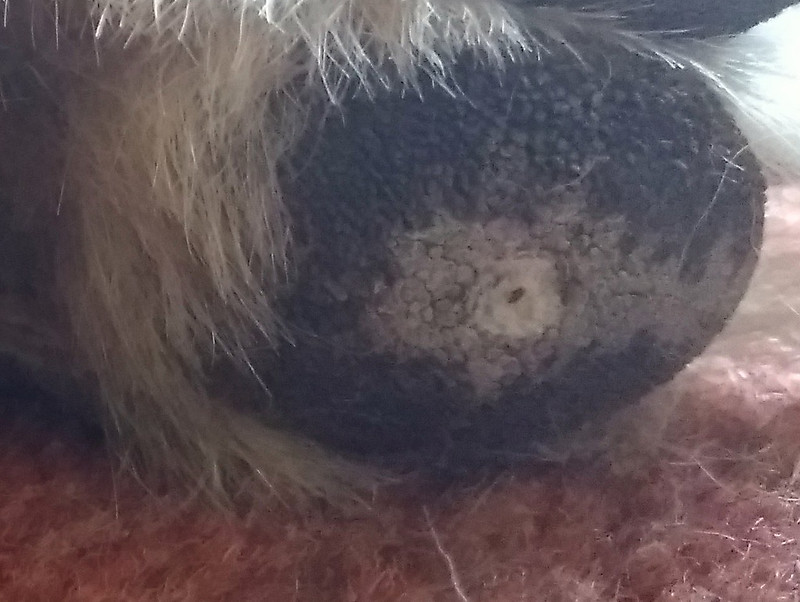 Given how he was with the vet yesterday I'm not sure even an expert corn huller will stand much of a chance - is it wrong of me to wish they made dog-sized cattle crushes?

The Lurcher Link boss mentioned painting it with superglue or nail varnish but I'm not sure he'd be happy with the smell... can you imagine if I put superglue on it and he just walked off

Filing is suggested, but it's flush with the rest of the pad so I can't see that helping. My favourite by far is covering it with a small bit of duct tape to cut off the oxygen supply - it seems to have a reasonable success rate if done consistently. I put it on easily just before I took him out for a short walk this afternoon (he's good at lifting his paws when asked), and he hasn't even noticed it's there. I'm not sure, but he might have even been more comfortable with it on - I didn't see much limping.

I might also try corn/verucca plasters instead of or under the duct tape but will see what the vet has to say first.

Any thoughts Nettle? Does it look like a corn to you?
Jasper, lurcher, born December 2009
Top

I think your plan is reasonable and has a good chance of success without sending J into meltdown.

Also notice the crack in the pad below the corn-pad. That might benefit from something rubbed on that would soften it and help it heal. It's nothing as far as injuries go, but is probably sore the way paper cuts are on us.
A dog is never bad or naughty - it is simply being a dog

Thanks - I'd wondered about the crack but he often seems to have cracks that don't seem to cause a problem. I've got some musher's wax or similar so I'll dig that out.
Jasper, lurcher, born December 2009
Top

Problems are still ongoing... my attempts to deal with the corn haven't made a difference and it's nowhere near being hullable as it's concave. Long story short, I suspect J has a corn and a worn pad (the worn one being the one that was cracked, behind the pad with the corn).

Treatment for corn: soften it, walk on soft ground and avoid hard ground, maybe wear a boot.
Treatment for worn pad: toughen it up, walk on smooth hard surfaces, don't let it get wet, don't use a boot as it will prevent it from toughening up. Soak it in salt water (J wouldn't let me do this for long enough), but don't take him to the beach as sand is so abrasive.

So pretty much mutually exclusive!

His slight limp on hard surfaces got worse 2-3 weeks ago and he also showed signs of general stiffness, like being very creaky after he'd been lying down for a bit, so I took him to the vet. We suspected that as well as the corn & worn pad, there was a bit of a joint/muscle issue going on too. So he's had a short dose of Rimadyl, which has made a difference - he's now back to where he was before he got worse, suggesting the Rimadyl helped with the joint/muscle but not with the worn pad/corn. The vet wants to see how he goes now the Rimadyl course is finished - he thinks J is old enough for joint issues to be expected, but nothing like old enough to warrant being on Rimadyl the whole time. (I may experiment with Boswellia if I think he'd benefit from long-term anti-inflammatories.

I'm now thinking I need to address the worn pad, and not worry about the corn for a bit. I've looked for creams etc. online but the only ones that seem to be specifically for toughening pads are only available in the US, and I'm wary of using something like udder cream or Musher's Secret as I don't want to soften it. I'm not sure whether 'keeping the pad dry' means no walks on grass or mud, and no walks on wet pavements, all of which could be challenging in the autumn winter, or whether I just have to dry them well in the house (though surely they'd dry on the carpet anyway?). And almost all of the heathland round here is very sandy, so that would be hard to avoid.

Plus, though walking on pavements may well harden up his pad, there must be a point at which it wears it even more... So how best to balance all these requirements?

We had a 1 hour 40 mins mostly pavement walk this morning (he chose the route, I got a bit lost in a housing estate I'd never been in before

) and though there was a slight limp most of the time, it was no worse at the end than the beginning (if anything, a bit better) and he was still happy to keep going and not showing any signs of discomfort other than the limp.

Sorry for the long post, but I wanted to get all the detail in!
Jasper, lurcher, born December 2009
Top

Aaaand a bit more detail... when we set off for his afternoon walk he was limping quite a lot (think I overdid it this morning

) on the pavement. I bumped into a friend and chatted for a few minutes and when we set off again he was really struggling. But he ignored my suggestion that we go home and told me he wanted to go to the park. He was much better in the park, even on the hard paths, and also still better on the pavement walk home.

Does the pattern of being worse at the start of a walk and better at the end fit with a worn pad and/or corn? Or could it suggest more of a joint/muscle problem?
Jasper, lurcher, born December 2009
Top
Post Reply
37 posts

Return to “Health, Diet and Exercise”